Aarong, one of the country’s leading fashion and lifestyle retailers celebrated the 30th anniversary in a grand way. Titled ‘Preview Eid 2008’ the fashion show was held at the Grand Ballroom of Radisson Water Garden Hotel on 27 August 2008.

An impressive collection of  kids wear collection that were flaunted by some cute and fresh-faced child models – girls in chic dresses in bright jewel tones and tuxedo sets.

Menswear collection managed to find a space in between these displays but surely left an indelible impact. The first line to win applauds was ‘Play Punjabi’ which saw models walking down the ramp with a basketball, flaunting raw attitude and funky ‘hoodie’ Punjabis.

Then came “Uniform Trends” followed by ‘Sheer Elegance which saw men strutting their stuff in muslin party wear. But the mesmerizing show-stopper came with the jamdani collection, which completes the special feature on local crafts started earlier this year with Aarong’s celebration of nakshi kantha. 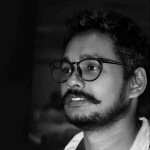